Synopsis: Who designed the Barberini Harp? The art historian Ursula Verena Fischer Pace offers answers to this question, based on available documentation, her ongoing research and iconographical analysis of the drawing titled <i>Progetto per un’arpa,</i> (Uffizi’s Gabinetto dei Disegni e delle Stampe). Fischer Pace argues that not only should this drawing be attributed to Giovanni Battista Soria, but that it is indeed a preparatory drawing for this famous Baroque harp. Art-historical and iconographical analysis of Soria’s other work and that for the Barberini court offer further arguments in support of this hypothesis; analysis of Soria's education and influences demonstrate his decorative “toolset" as clearly recognisable, and Soria could be seen as familiarised with making musical instruments. The article also supports the view that the harp depicted by Giovanni Lanfranco in <i>Venus Playing the Harp</i> is the Barberini Harp. By closely examining the figurative toolsets of the drawing, the painting, and as present in the carvings on the harp itself, and by considering the historical context, the article constructs a convincing account of some of the processes leading to the creation of the Barberini Harp.

Link to the original version of this article in Italian: Disegni per strumenti musicali. 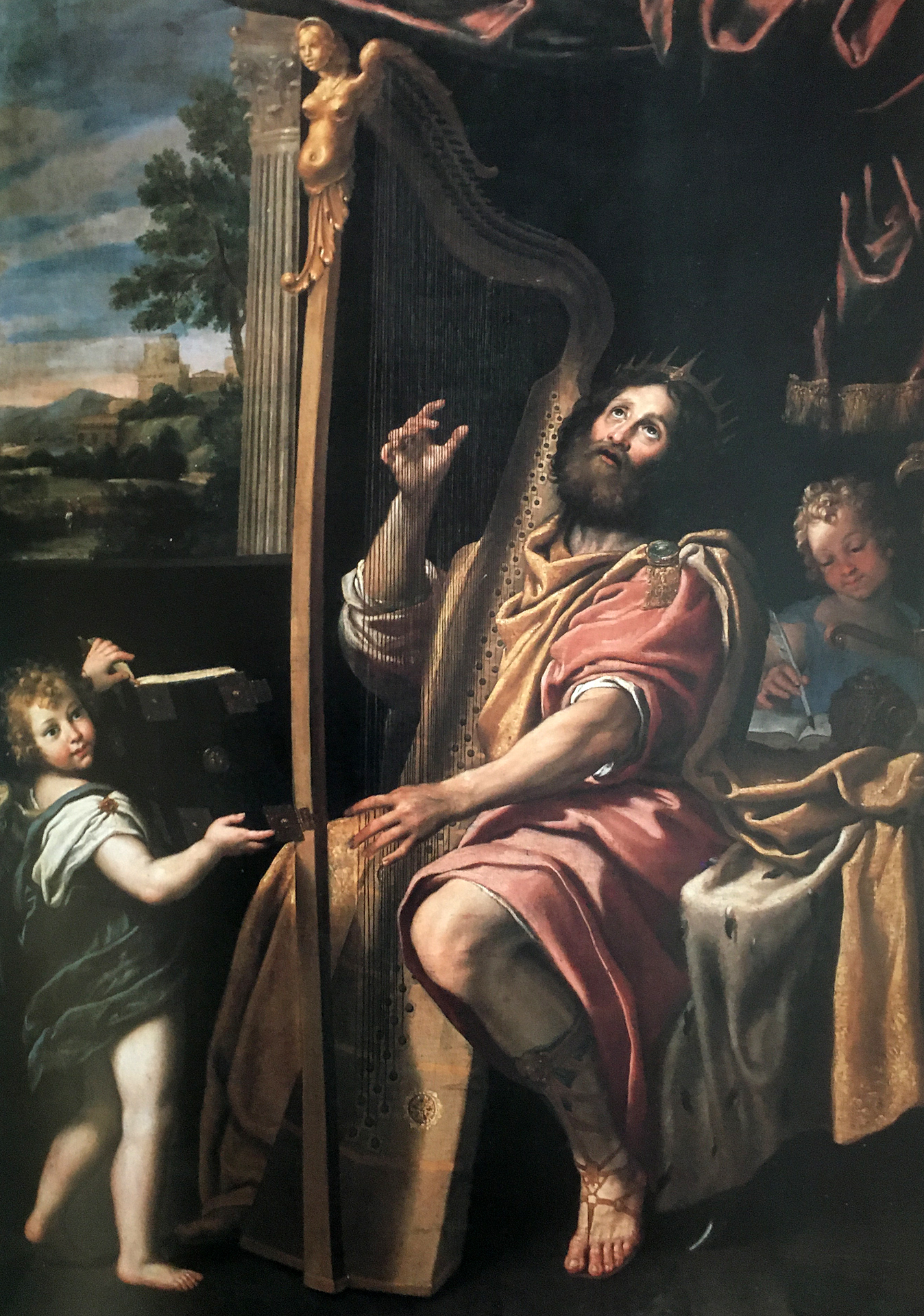 Naturally, paintings of King David usually offer an opportunity to paint a harp. Pier Francesco Mola’s drawing3 Apparizione dell’angelo a re Davide che suona l’arpa provides a very good example in a richly decorated harp, undoubtedly a preparatory work for a painting that, as yet, remains unknown. 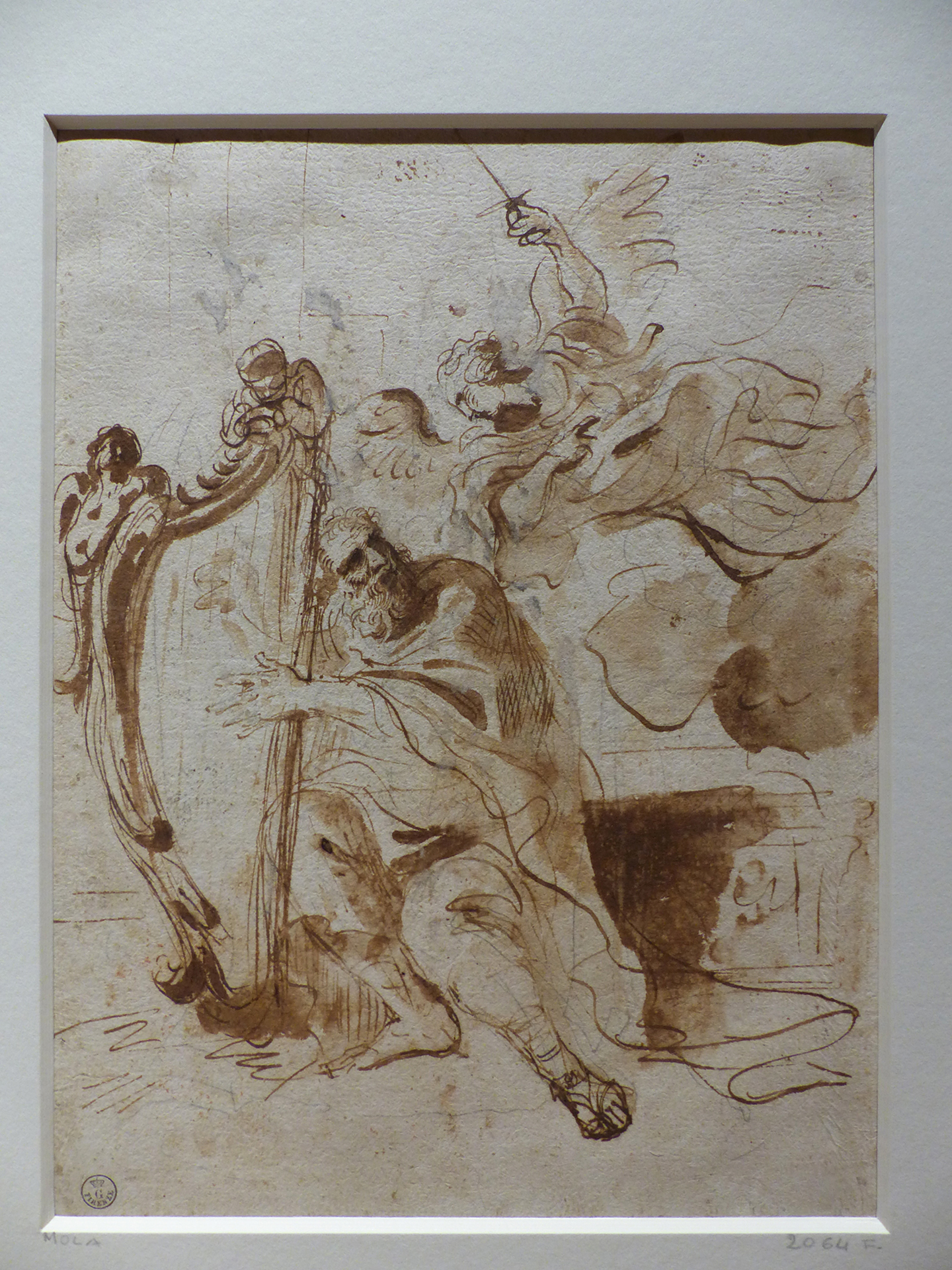 Less common, however, are preparatory drawings for musical instruments intended for carvers and soundbox builders. One such drawing, held at the Uffizi, has been long known of (and many works on it published).4 This drawing has been compared with the Barberini Harp, in the collection of the Museo Nazionale degli Strumenti Musicali in Roma, though it has not so far been identified as a preparatory drawing for this harp.5 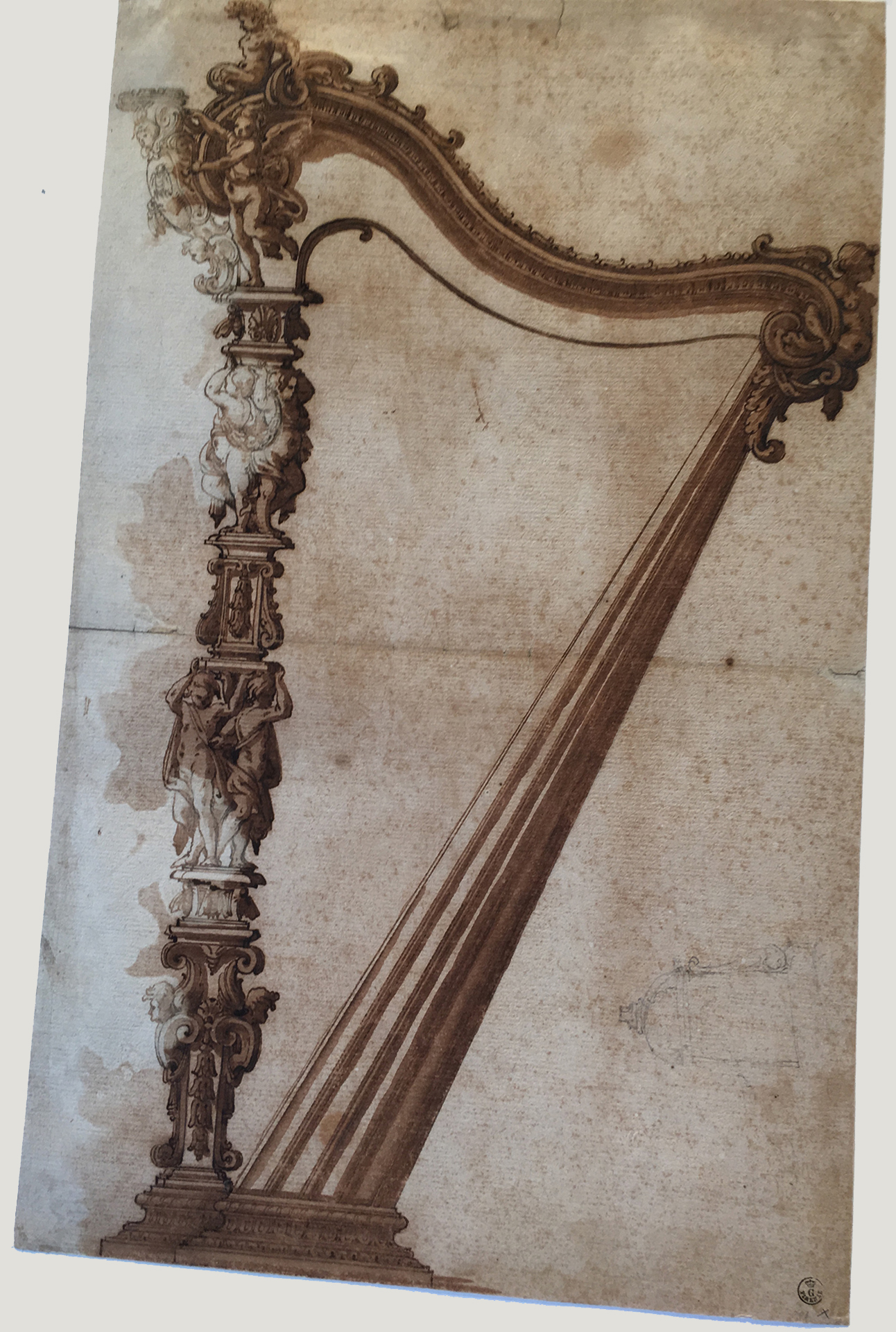 The drawing presents a project for a richly decorated harp, its column adorned with carvings: architectural motifs of volutes and capitals alternating with putti; atlas figures on pedestals dividing the column in three parts; and sphinxes at the bottom. 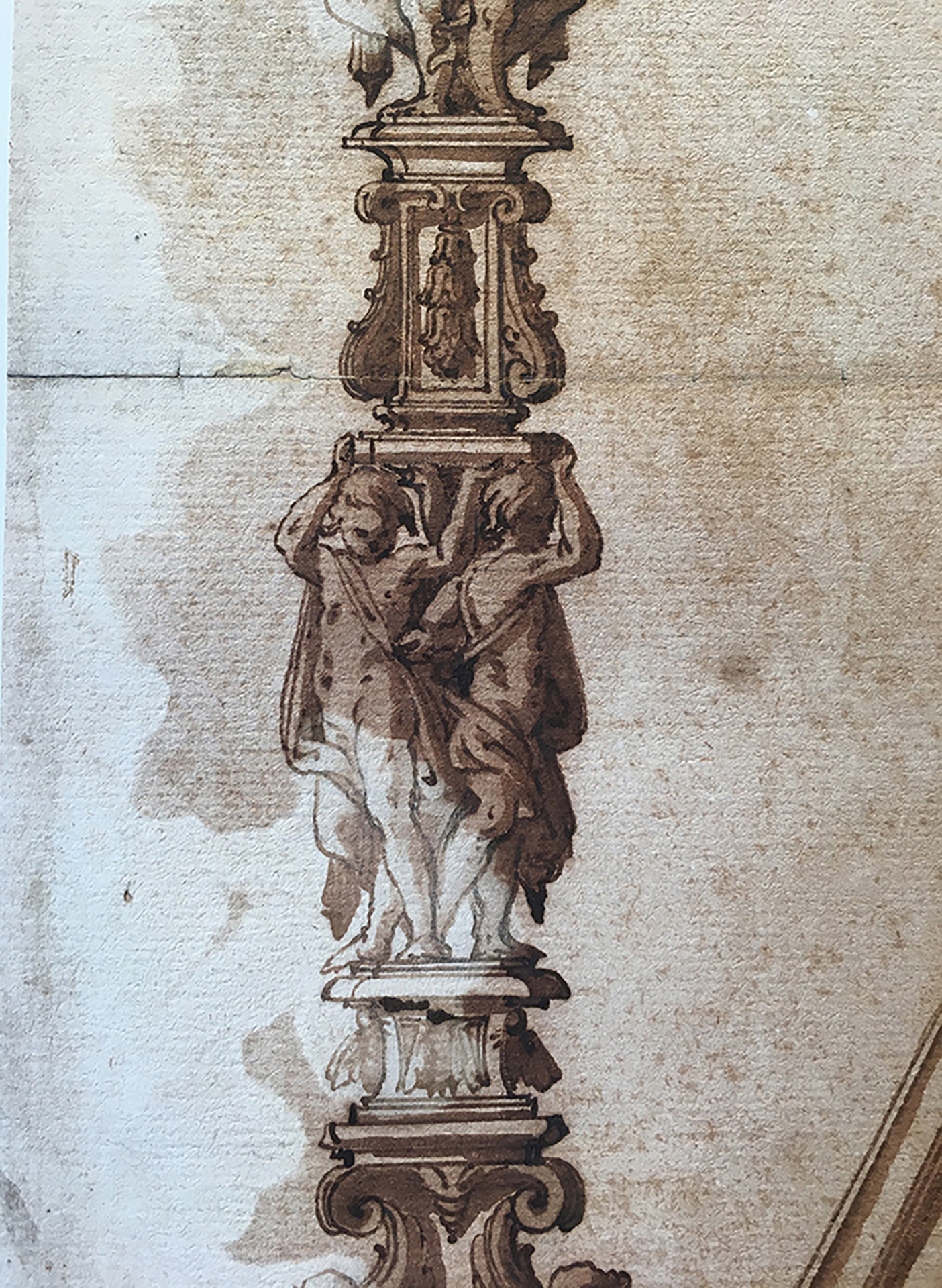 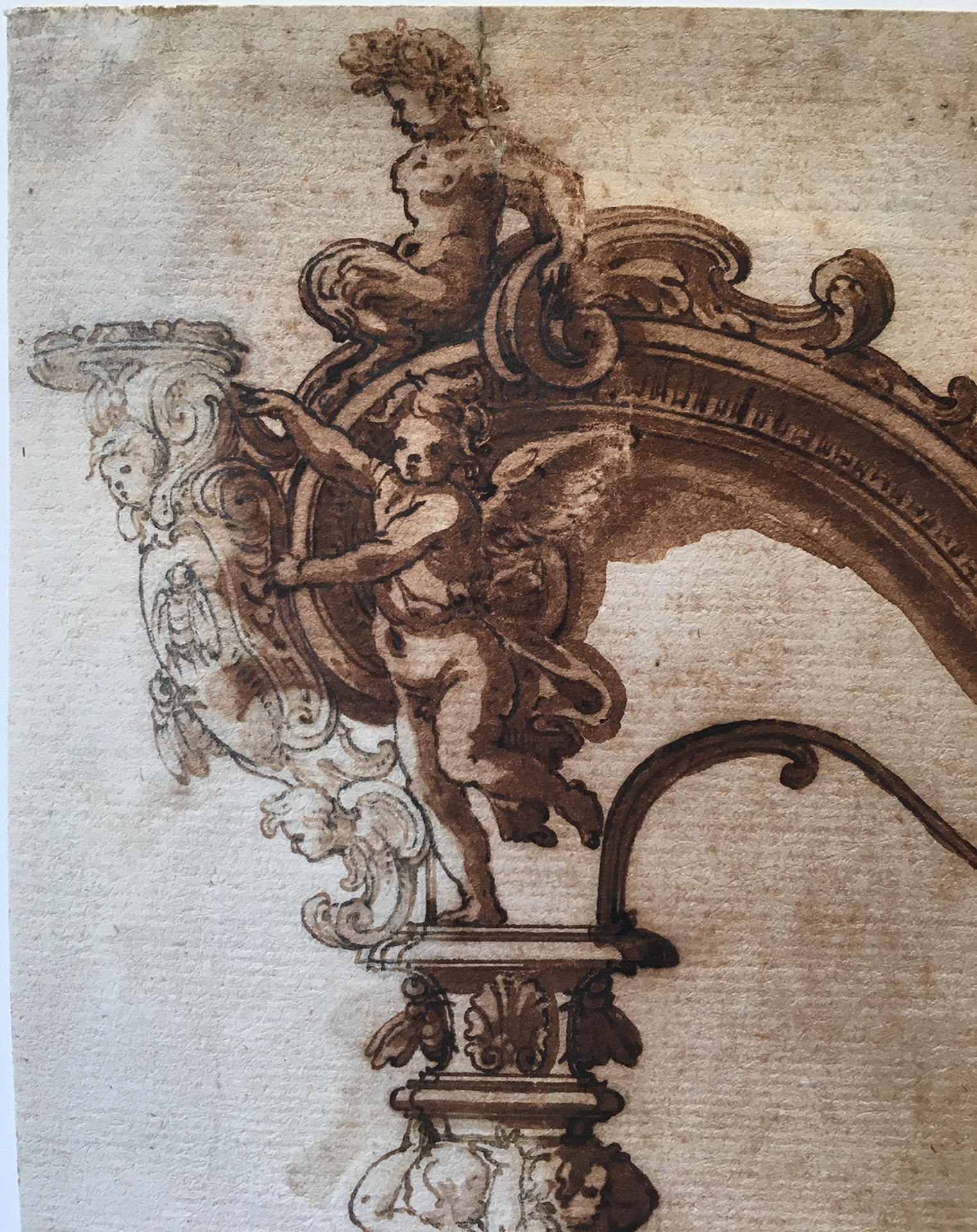 On the top frontside is the Barberini coat of arms: three bees surmounted by a cardinal’s hat, which is in turn supported by a winged putto. Bees are also depicted on the pedestals. There is a satyr seated at the base of the column. The upper crossbeam [harmonic curve] uniting the soundbox and the support [column] ends in a volute formed by a sphinx. 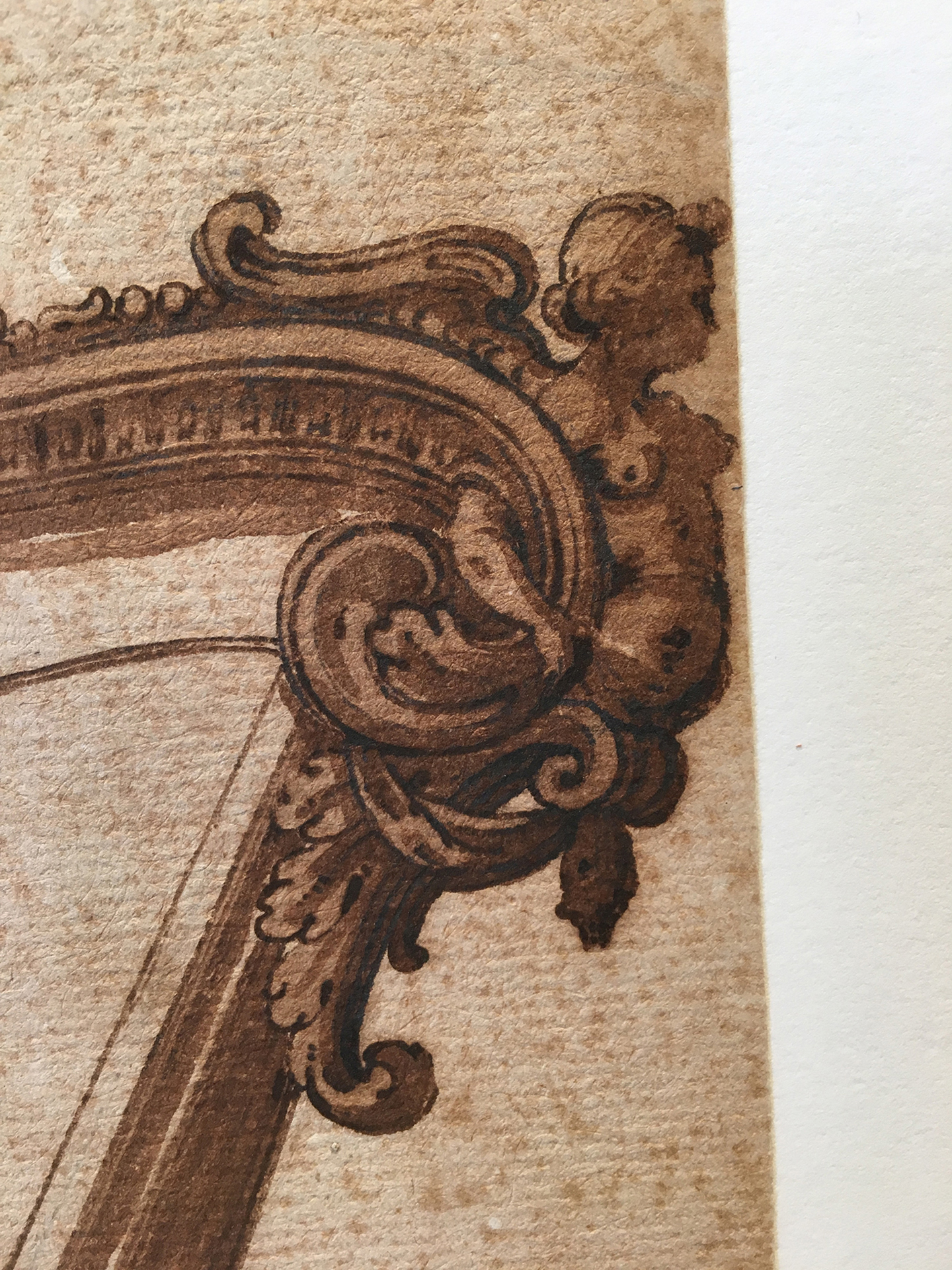 The drawing and the instrument known as the Barberini Harp, at the Museo Nazionale degli Strumenti Musicali, are clearly closely related to each other as are the drawing and Giovanni Lanfranco’s painting Venere che suona l’arpa o la Musica from the collection of Antonio Barberini il giovane.6 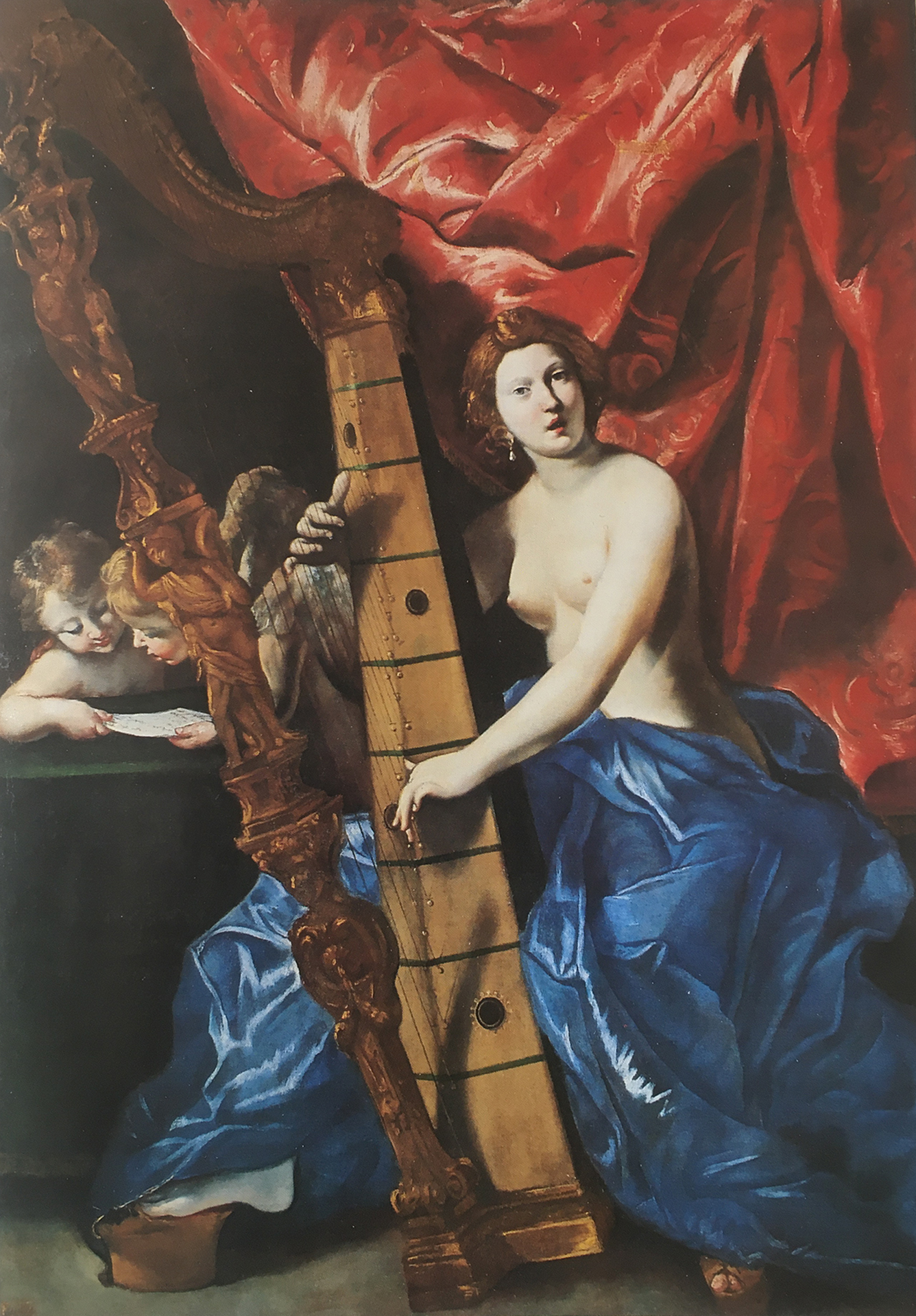 The Cardinal himself commissioned the instrument and gave it to the musician Marco Marazzoli (1619-1663),7 known as “dell’Arpa” (of the harp). Marazzoli was in the service of the Barberini family as a singer, instrumentalist and composer. After his death, the instrument returned to Cardinal Antonio who also received Lanfranco’s above painting, which the musician originally commissioned his friend Lanfranco to paint.

I believe that the drawing held at the Uffizi is a preparatory drawing for the Barberini Harp8 displayed at the Museo Nazionale degli Strumenti Musicali, and depicted in Lanfranco’s painting. The correspondence between the instrument made for Antonio Barberini and the harp depicted in the painting is obvious: it can be deduced from the perfectly corresponding figurative motifs. Except for the coat of arms, not depicted in the painting, all the decorative details are the same and are reflected in the carver’s description. From an iconographic and visual point of view there are therefore no justifiable doubts as to the identity of the painted harp being the same as that of the harp known as the Barberini Harp.

Compared to the harp, there are, however, some variations concerning the design of the decoration. On the instrument, the sphinx is replaced by a lion’s head with a thick mane, also seen in the painting, whereas on the opposite side, above the coat of arms, the satyr is missing and in place of the cardinal’s hat we see a crown and the Golden Fleece. This change was made later, after the death of Cardinal Antonio (1671), when this prestigious order was conferred in 1673 on prince Don Maffeo Barberini.9

The Barberini Harp at the Museo Nazionale degli Strumenti Musicali ().

The group of putti under the coat of arms is on the instrument formed of two atlases, small herculean boys wearing lion skins. In the row below are two draped youth atlases, and at the bottom a male mask and the Barberini heraldic motifs, the bee and a laurel branch. The fact that the Barberini coat of arms is missing in Lanfranco’s painting indicates that the painting was not commissioned by the Barberini but by the musician himself, who probably played the harp. 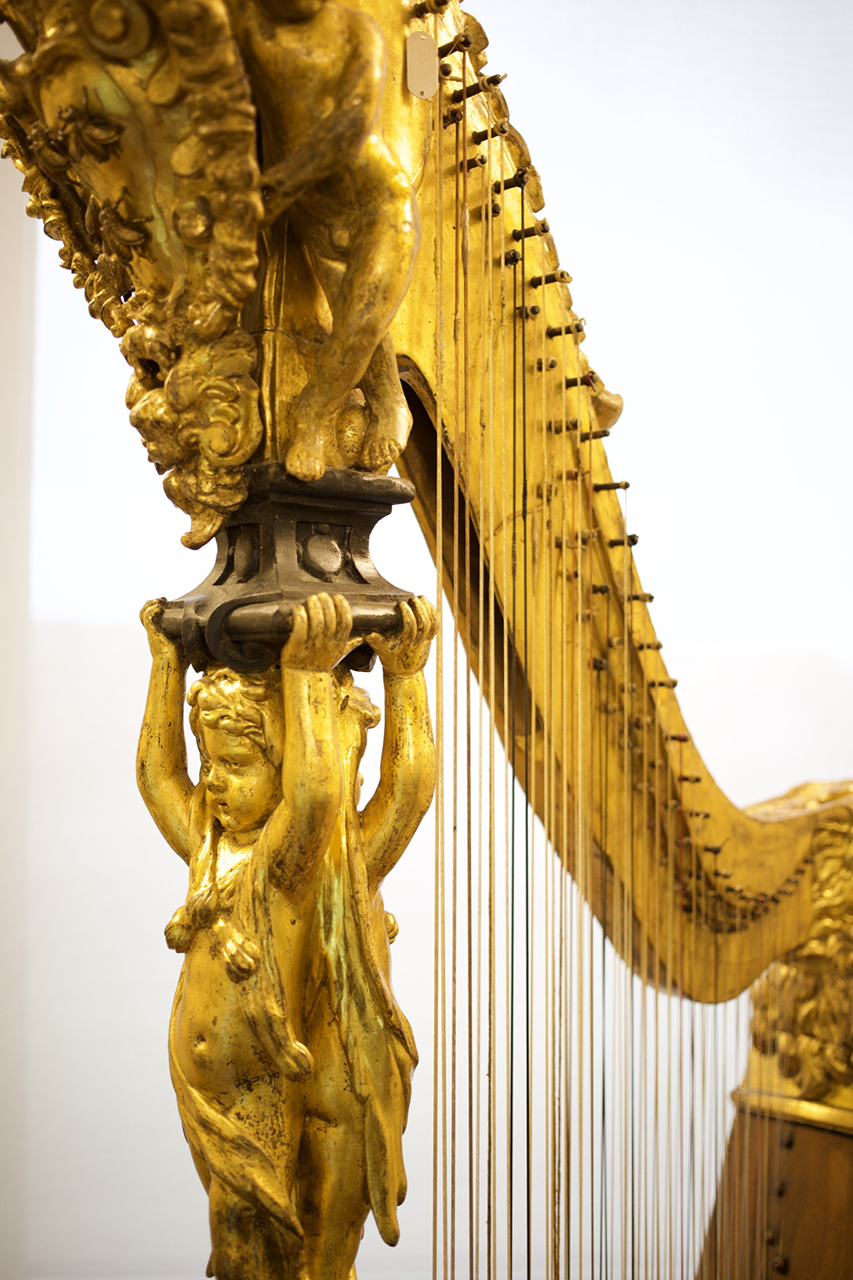 Lanfranco’s painting provides a clear chronological indication for both the drawing and the instrument, since it was undoubtedly painted before the painter’s departure to Napoli in 1634 and after the arrival in Roma of Marco Marazzoli, who commissioned the painting, and—as shown in some documents—had been in the service of Cardinal Antonio Barberini il giovane since 1629.10 This date matches the dates indicated in the documents recently found in the Barberini papers of the Vatican archives. These dates refer to the payments made, respectively, to the harp maker Geronimo Acciari on August 23rd, 1632, and to the harp carver Giovanni Tubi in 1633.11 The figurative toolset of this drawing is not of a technical nature but purely decorative, confirming that the drawing dates back to the beginning of the 1630s, in line with the dating of the painting. However, the drawing cannot be attributed to Lanfranco due to its different graphic style. Rather, the evident correspondence in the carved motifs between the painting and the harp seems to indicate that Lanfranco had his friend’s instrument as a model in front of him.

The plastic motifs and the stylistic aspects of this drawing are rather of Cortonesque origin, bearing similarity to Pietro Berrettini da Cortona’s designs for funerary monuments, engravings and liturgical objects such as a ceremonial mace, which—among other things—carries the Antonio Barberini il giovane’s coat of arms.12 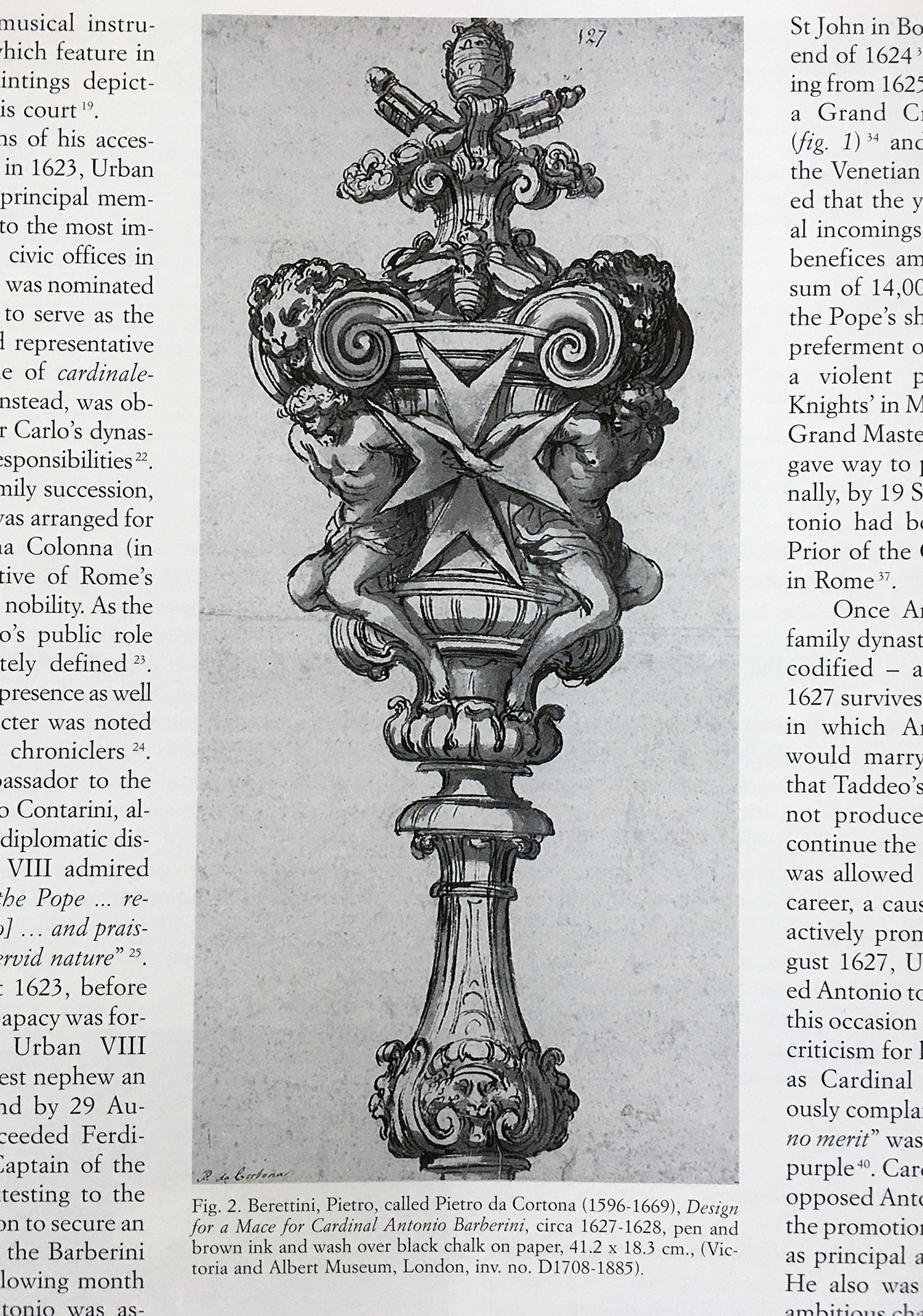 Moreover, the architectural, figurative and animal motifs are also similar, as are the mixed technique of pen and watercolour. But the draftsman is not Pietro da Cortona either, thought it appears they could have been someone close to him. The author could also be Tubi, the carver of the instrument, but we know nothing about his artistic background in drawing. Three decorative projects from the same Uffizi collection (Inv. 1591 E; Inv. 1592 E; Inv. 1593) are likely to have been made by the same draftsman.13 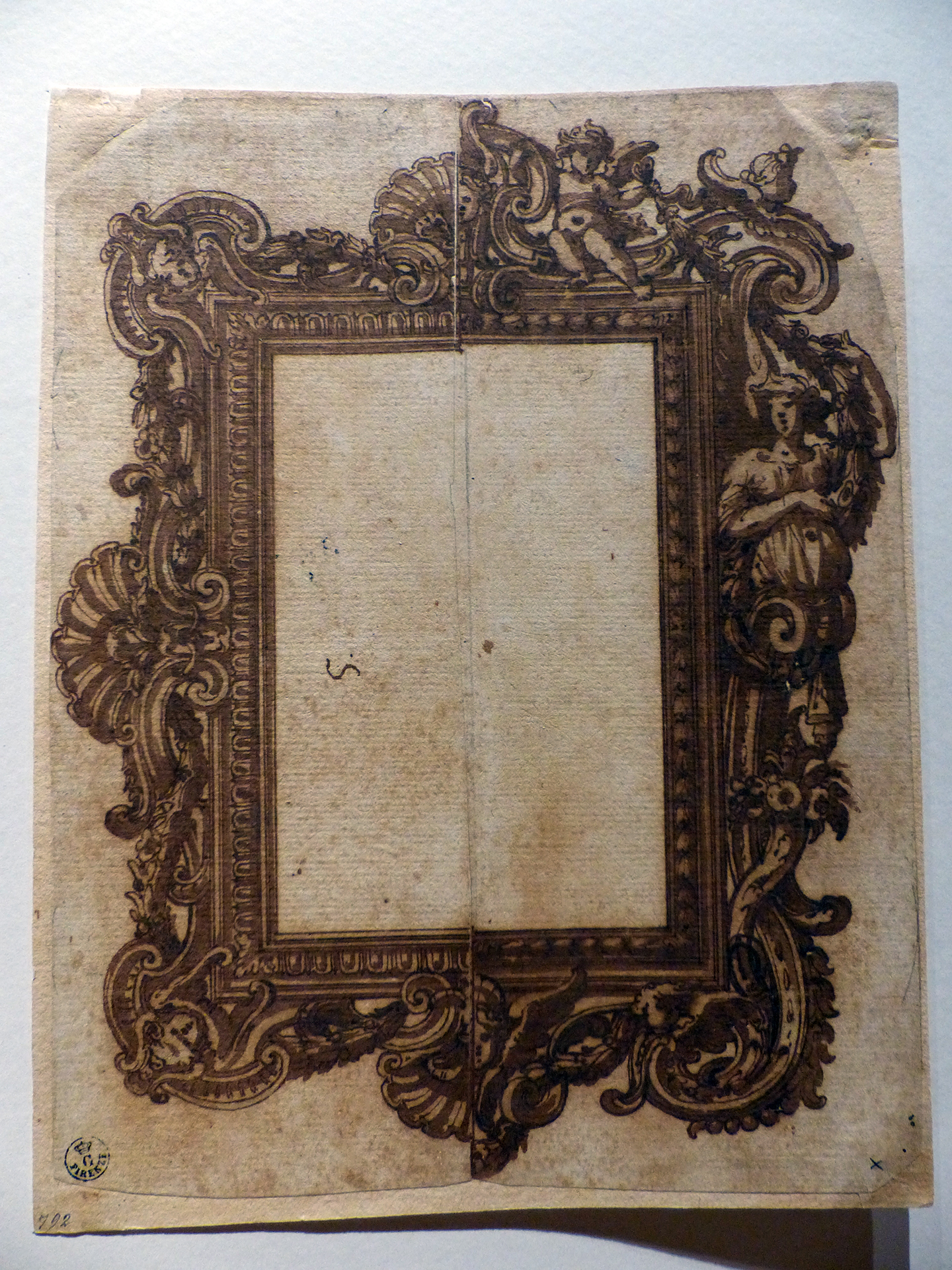 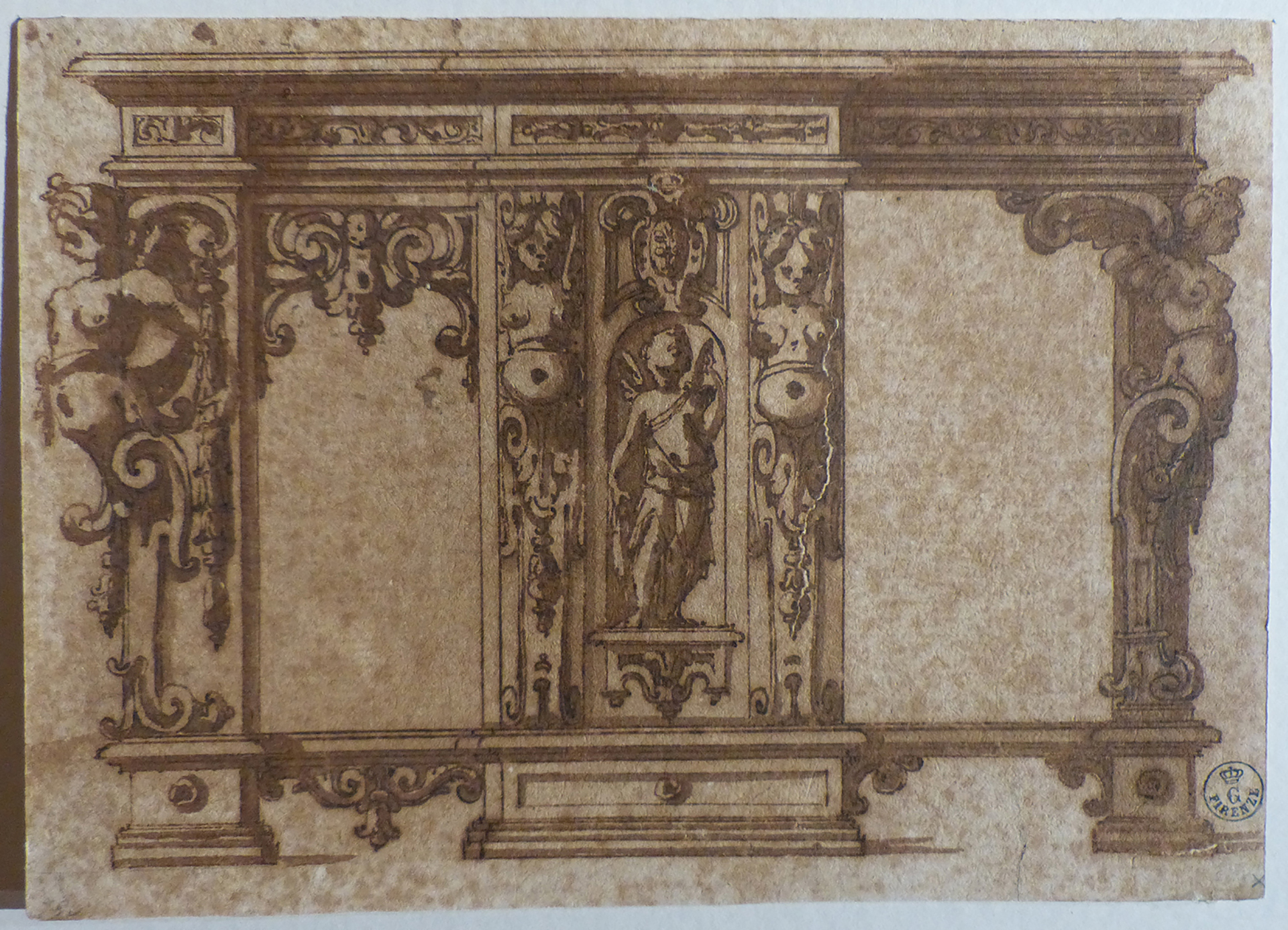 One could think of both Bartolomeo de Rossi and Giovanni Battista Soria, both active carvers in the service of the Barberini family (the former, for example, in the chapel of the canons in the Vatican between 1624 and 1627, and the latter as a carver of frames). Both are mentioned in the Barberini archives for those three years.14 All the stylistic clues, however, seem to lead to Soria, born in 1581. His father was a carpenter. Soria was educated in the workshop of Giovanni Battista Montano, also a carver and architect.15 Both the design and the execution of the Palazzo Barberini library are attributed to Soria, as well as the realisation, in the same period, of the richly carved and gilded organ façade for organs in the Santa Maria sopra Minerva, commissioned by Cardinal Scipione Borghese (1633). Although the organs can only be recognised from the bottom, their decorations seem to be very similar to the ones of the aforementioned projects, and it is indeed interesting to notice that these too are musical instruments. Besides, his mentor Montano also conceived and executed designs for organs in various Roman churches. Although no decorative drawings by Soria have been clearly identified so far (only architectural drawings), the fact that he was an expert cabinetmaker and architect, often working for the Barberini together with Pietro da Cortona, corroborates my proposal that he might be the author and designer of such a project.16 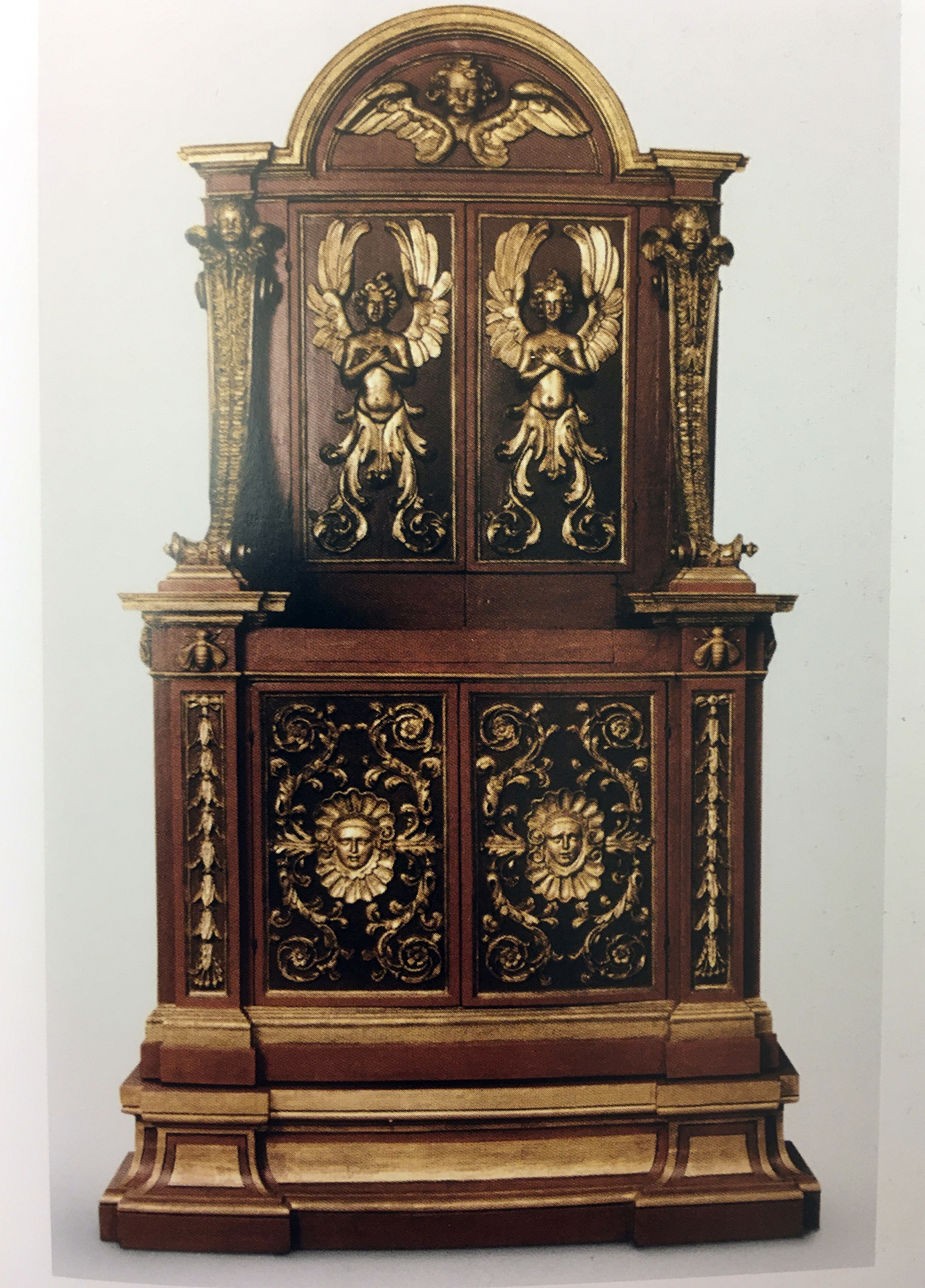 Similar motifs of volutes and racemes are present on the wooden case that Soria made in 1630 for the relic of the Chair of Saint Peter,17 as well as on a piece of furniture still in the Palazzo Barberini that supports a fresco by Guido Reni, the Putto dormiente.18 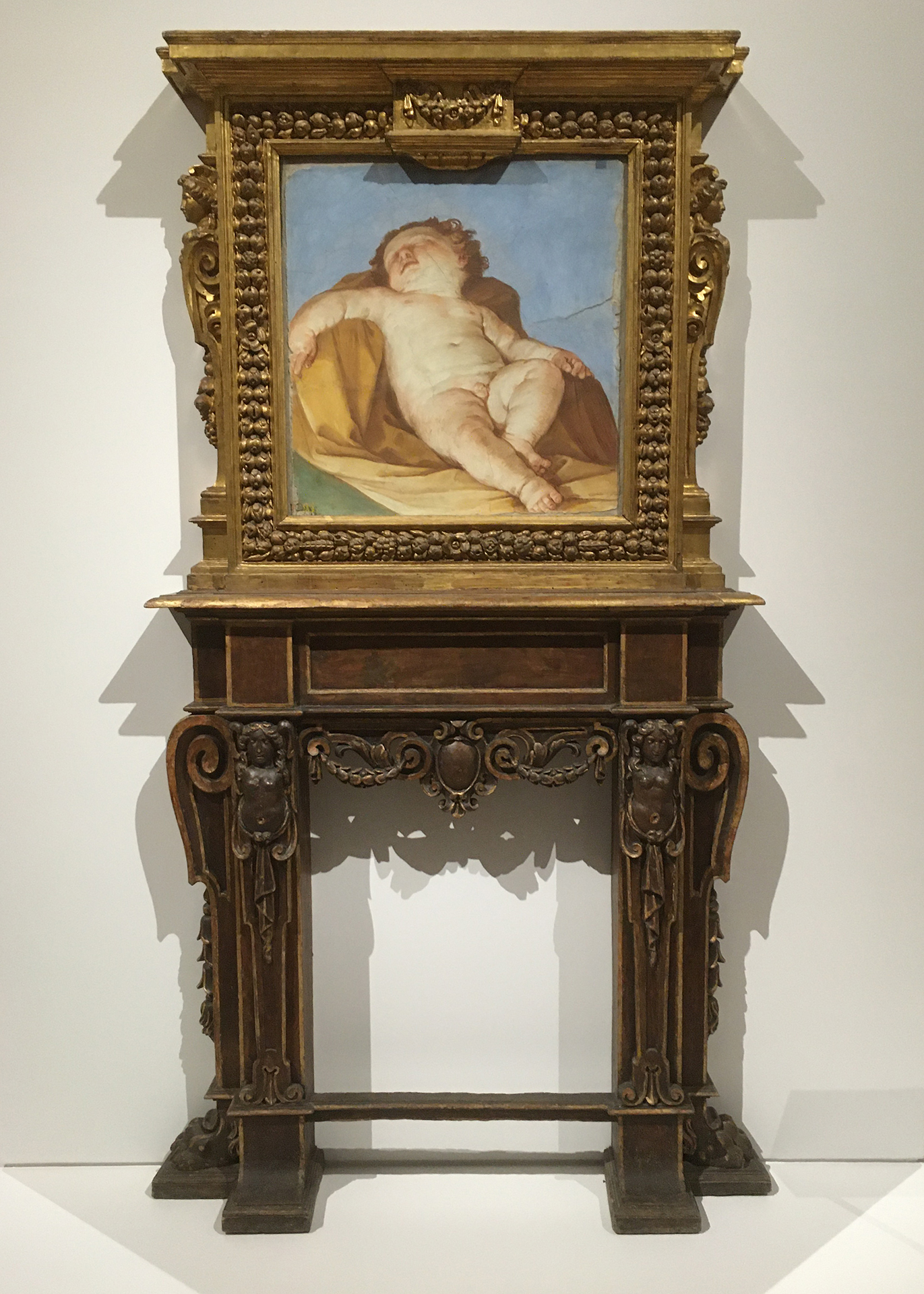 The decorative vocabulary is in this case so incredibly similar to that of the drawing for the harp and to another in the Uffizi used for the base of a piece of furniture,19 that it could indeed be attributed to the same designer. This type of naturalistic and sculptural decoration doesn’t reflect the typical Bernini style, although many have already suggested Gian Lorenzo Bernini’s name as the author of “one of the most beautiful musical instruments ever known."20 But as Alvar Gonzáles Palacios points out, “it is somehow older,” permeated by the Barberini culture based on a more serious style.21 The presence on the sheet of an architectural black-pencil sketch in the form of a tabernacle or the cornice of a ciborium, in the lower right corner under the soundbox, may also provide further evidence of Soria’s activity as an architect, although one should keep in mind that his profession as an architect was far less important than has long been assumed, as Cristiano Marchegiani recently rightly pointed out, thus downgrading Soria’s profile as an architect in the Dizionario Biografico degli Italiani.22 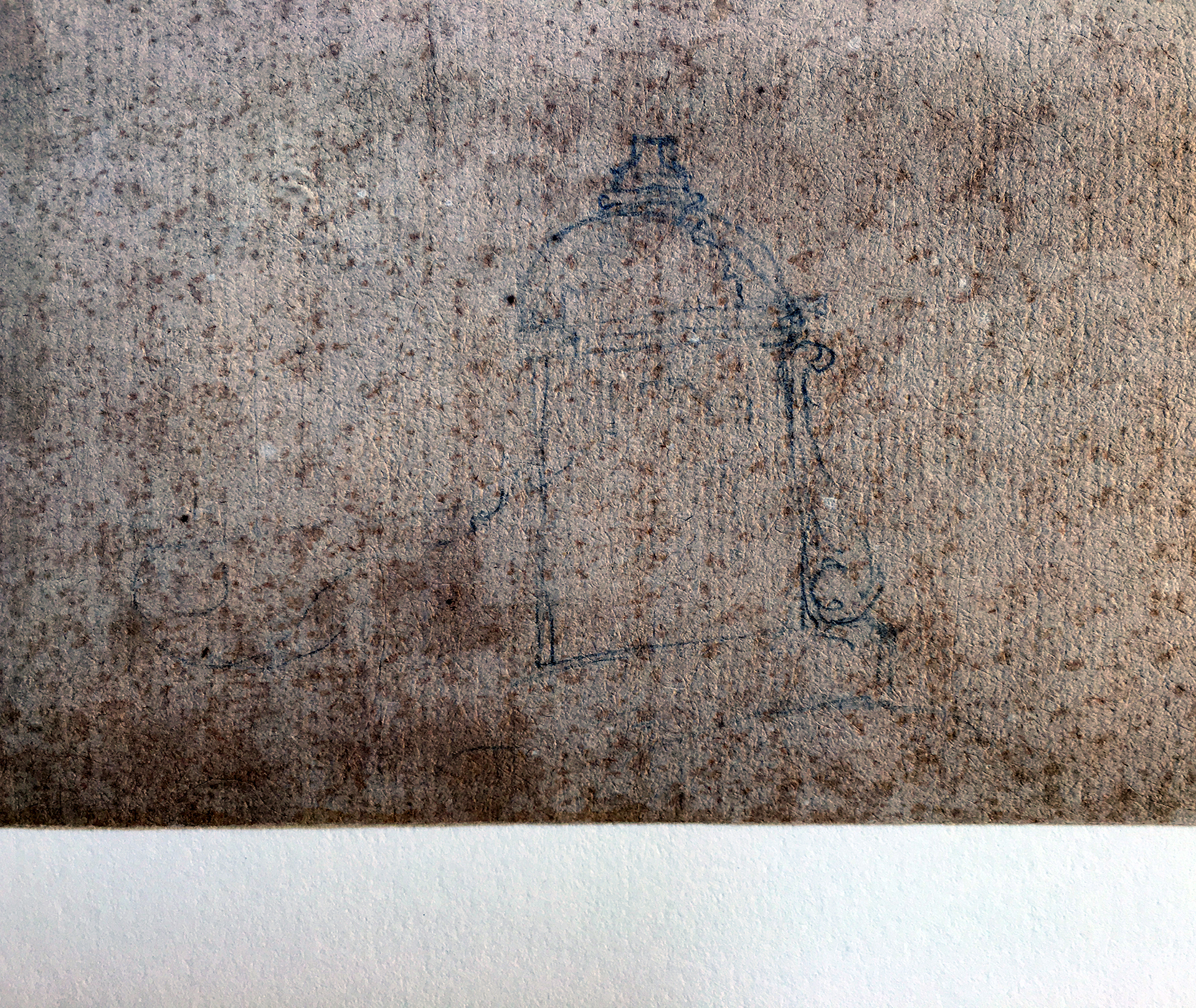 His apprenticeship with Giovanni Battista Montano and Antonio Pomarancio was a guarantee of his solid artistic professionalism, undoubtedly recognisable in this project of refined decoration. Soria was also responsible for an edition of architectural drawings by his master Montano, whose teaching was just as important to Pietro da Cortona, the Barberini artist par excellence and one of Soria’s closest friends.

The proposal to attribute the conception and design of the Barberini Harp to Soria is further justified by the above mentioned close relationship between the artist and the Barberini’s commissions for the works in the Basilica San Pietro and Palazzo Barberini.

Translated by Annamaria Celeste, with the generous support of the Istituto Storico Austriaco a Roma.