“My Hands are Armed with Nought but Sweet-toned Strings?" Different Ways to Use the Same Instrument

Synopsis: The harpist and researcher Chiara Granata provides a scientific commentary on the opposing views presented in the Harfenlabor Interview, <i>About the Barberini Harp</i>, by the harpist and researcher Mara Galassi and the master luthier Dario Pontiggia. “Is it worthwhile to construct an ‘absolute copy’ of" the Barberini Harp “that runs the risk of not being completely playable?” the luthier asks? Taken from the position of the musician, would it not help to get “closer to a new vantage point, which offers the opportunity to listen to something quite different from what, for decades, we have called ‘early music.’” Granata presents arguments for keeping this tension open. Archival research has uncovered that the Barberini Harp was the work of a group of artisans; its final efficiency directly honed by the musician. Though many 17th century harp performances were best suited to a small “sonorous” space, some treatises and musical scores from the period offer examples of harp’s highly rhythmical bass lines used in dance contexts, and of its “resonant” sound that might be suited to large outdoor spaces. Granata proposes that it is precisely the contradictions presented by such an instrument that will offer a closer understanding of the Barberini Harp.

One of the typical forms of ancient knowledge, still very much in use in the early 1600s in oral or written form, is that of the debate. Rather than advancing a thesis, it presents a dialogue between opposing views. With this in mind, I find it very interesting that the luthier Dario Pontiggia and the harpist and researcher Mara Galassi express two opposite viewpoints regarding the Barberini Harp. On the one hand, someone who reconstructs copies of musical instruments and is accustomed to comparison among multiple similar cases finds himself coming to terms with a single instrument, which is thus less understandable and more contradictory. Is it worthwhile to construct an “absolute copy” of an instrument that runs the risk of not being completely playable? On the other, there is the position of the player, who cultivates the utopia of the “absolute copy” in the hope of getting closer to a new vantage point, which offers the opportunity to listen to something quite different from what, for decades, we have called “early music.” I believe we can keep the tension between these two viewpoints open, rather than trying to find a compromise.

The first thing that struck me when I saw the archival document of the order for the Barberini Harp1 was the discovery that it was not the brilliant creation of a single maker, but the work of a group of artisans. There are the separate efforts of the luthier and the carver, and we cannot exclude the possibility that there were other contributions, on the part of a gilder, for example. The timing of the order may have suggested the assembly of parts created at different times (an existing soundbox, with a neck and column built for the occasion), leading to some complications, but I would like to add a further observation: the final work of completion of an instrument was often left up to the musician, who would oversee and adjust the stringing to meet his or her own needs. While in February 1633 payment was made and the harp was delivered to Marazzoli, two months later we find new expenses, including: “Summary of expenses for the month of April 1633: 25 scudi to Marco Marazzoli for the strings of the harp.”2 This implies that the final efficiency of the instrument (as also happened with the Estense Harp) was directly honed by the musician, also perhaps by correcting possible problems of construction. I imagine an instrument of the 1600s as a ductile object, subject to modification and not immediately ready for use, or the prototype of a series: in a period of organological experimentation, the musician played an active part in the construction.

To fully understand an instrument, it is necessary to hear it played in different spaces. It is very probable that the Barberini Harp made its first appearance for the Giostra del Saracino held in 1634 at Piazza Navona in Roma. The report on this spectacular event, illustrated with etchings by François Collignon and Andrea Sacchi, bears witness to the presence of a large carved harp placed inside the golden ship that entered Piazza Navona late at night, transporting singers and musicians and astonishing the audience. 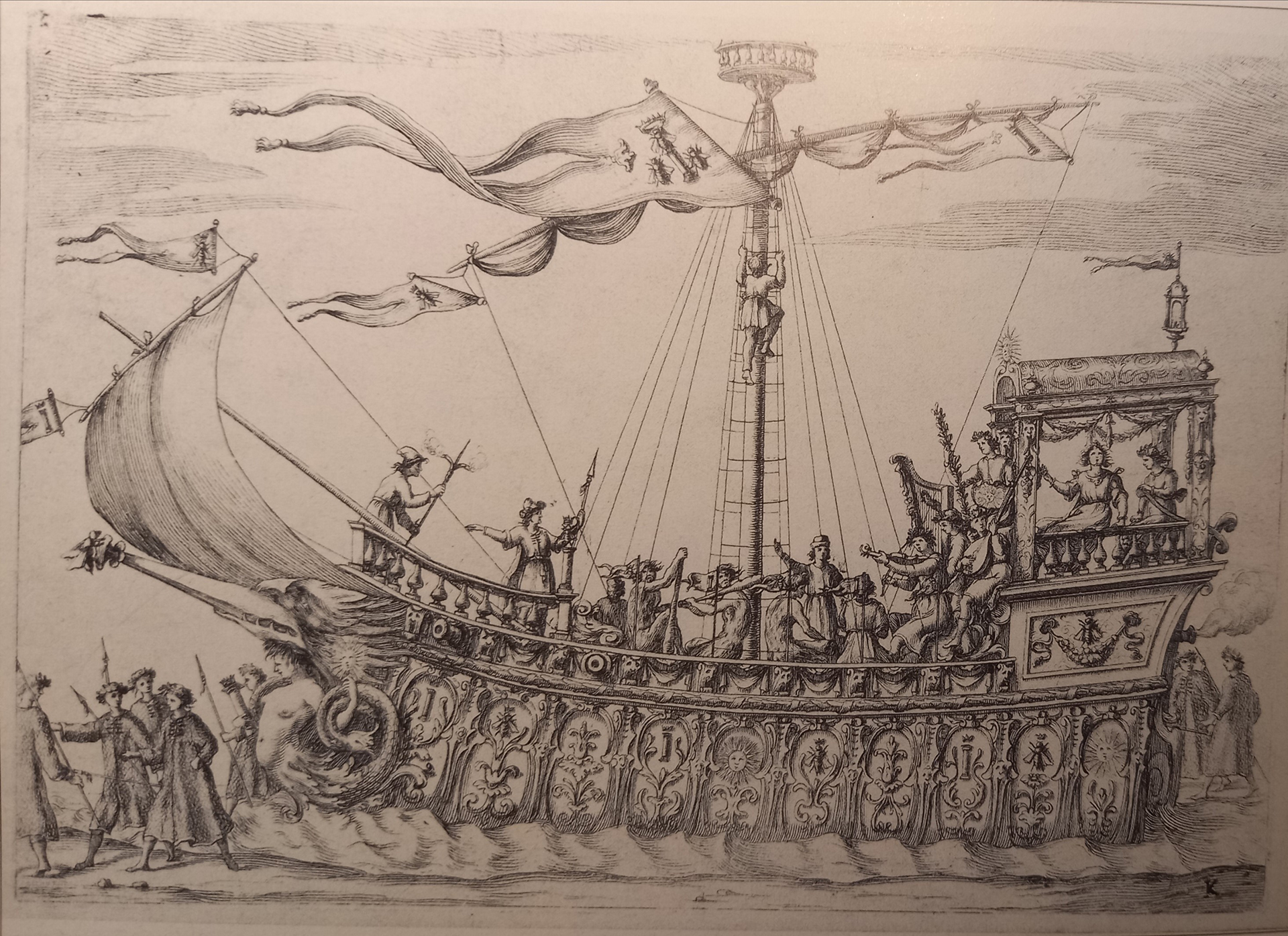 What kind of sonic presence could a stringed instrument have in an enormous square packed with revellers? Was it the same instrument that entertained a small group of illustrious listeners in the hall of a palace? I have the impression, from the many references in the treatises and historical chronicles, that performances in the 1600s paid subtle attention to questions of acoustics, and that the choice of instrumentation was much more closely related to the sonic possibilities of instruments and spaces. For this reason, it is hard for me to imagine the existence of “parade” instruments that were impressive to look at, but not from the standpoint of emitted sound.

Instead, I think there were different ways of playing the same instrument, effective for large spaces and for the more detailed listening in a concert chamber. Solo performances for double harp seem to reflect a refined musical practice that focused on dynamics. I have selected a particularly evocative example, taken from a 17th-century treatise on religious and moral subject matter:

The performance described favours polyphony (recercata), and two-part counterpoint (due cori that diminish in turn). This type of execution calls for an acoustically responsive space that makes the composition audible in all its parts. Hence a small and particularly sonorous space.

Unlike the instances in which the harp is described together with other instruments, here there seems to be an emphasis on its sonic and rhythmical aspects. The author of Il Corago, the anonymous text from the start of the 1600s, describes the harp as one of the instruments best suited to dance music, because it is capable of producing a clear, resonant impulse. “Essendo la musica rappresentata in scena più vivace et attuosa assai di quella cantata in chiesa o in altra occasione, molto più viva [= vivo] e quasi arieggiante [?] è l’istromento di corde che stacca per aria la botta che non è il continuo suono dell’organo, per questo nei balli l’arpa è stimata la migliore.”4 And Stefano Landi, in Sant’Alessio, combines the harp with lutes, theorbos and violones, assigning it a more rhythmical bass line with respect to that of the harpsichords. Not all of the choices of acoustics or instrumentation are comprehensible to us. For example, it is hard to imagine the concert for the wedding of Francesco Farnese, Duke of Parma, with Dorotea Sofia Farnese, in which one heard a harp accompanied by as many as three harpsichords.5 Nevertheless, this variety of situations serves to bring us closer to an instrument that seems to have had highly varied and diversified use. The construction of an “absolute copy” could shed light on the various uses of this instrument. Its contradictions, which each craftsman and each musician could then resolve in a different way, would probably remain intact. Today, as in the past.

Cite:&&Chiara Granata, "'My Hands are Armed with Nought but Sweet-toned Strings?' Different ways to use the same instrument," Harfenlabor.com, May 8, 2022, https://www.harfenlabor.com/research/my-hands-are-armed-with-nought-but-sweet-toned-strings-different-ways-to-use-the-same-instrument/.